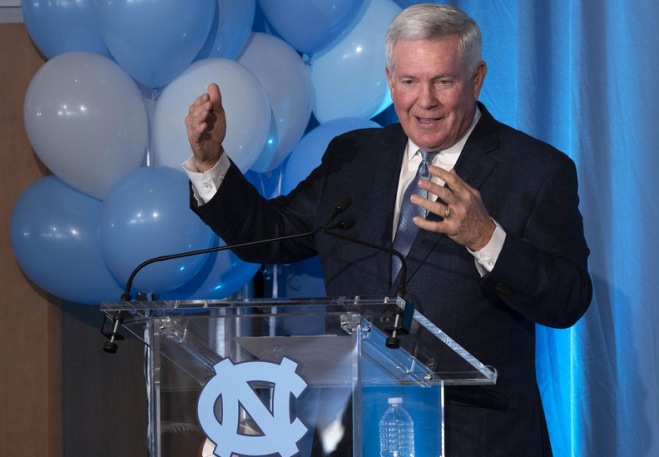 Here’s a crazy thought: What if Mack Brown isn’t off his rocker to think UNC could contend this year?

OK, I’m not ready to crawl out on a limb quite that rickety just yet. The QB situation at UNC remains a mess, and a new coaching staff typically needs at least a little time to get things fixed when they’re as far off the rails as things are at UNC.

Here’s an interesting tidbit that felt like it was worth considering. Last season, UNC finished 2-9. That’s bad. But 65.6 percent of the Heels’ offensive drives came in game situations when the score was within 8. Every single team with a higher rate last year won at least 7 games. In fact, every team but one that played at least 60 percent of its snaps within a TD (30 teams) won at least 5 games, and USC, Kansas State, Air Force, Tulsa and Colorado were the only ones that didn’t make a bowl.

This is all logical. It’s unlikely that a really bad team will spend so much time playing in close games. In fact, teams that won four or fewer games last season lost by an average of 13 points. But UNC’s average was just 7.

Look at scores through three quarters. Those 4-win or worse teams trailed, on average, by 10.3 points. The really bad teams were far worse. Louisville trailed entering the fourth quarter by an average of 20. Rutgers by 16. Oregon State by 14. But UNC’s average deficit to start the fourth quarter was just a field goal.

Those margins should mean something intuitively intuitively, and it tends to play out historically, too. (More on that in a moment.)

So, let’s look at the recent history of bad teams that spent a lot of time in one-score games.

In 2017, just three teams had at least 96 drives (UNC had 95 that year, so that’s our line of demarcation) when the score was within 8, and still didn’t make a bowl game.

EMU improved by two wins in 2018 and made a bowl game for just the second time since 1987.

UMass still stunk, finishing 4-8 again. But it’s UMass. What’d you expect? (And actually, UMass looked a lot better in 2018 than it has in a long time, but it just couldn’t get over the hump.)

And Syracuse. Syracuse got a little better. Yeah, the Orange went from 4-8 to one snap away from potentially winning the ACC.

Go back one more year and look at 2016. That season, 10 teams matched our criteria. Ball State and Kent State both managed to stink again in 2017. Cincinnati stayed even — but then broke through for a massive gain in 2018. The other seven all saw significant improvements in their final record, including FAU (3 wins to 11), Georgia State (3 wins to 7) and Virginia (2 wins to 6).

On the whole, over the past two iterations, teams that fit this bill improved by 2.6 wins.

And sure, 2.6 extra wins still leaves UNC short of a bowl game and not very good. But how about this for some historical precedent…

What happened the next season? Maryland went 9-4 and Ralph Friedgen won ACC Coach of the Year.

There are plenty of other numbers that suggest UNC isn’t far off.

The Heels were a woeful -68 in points off turnovers differential last season. That’s a number that tends not to be repeatable. So get them a little closer to even, and suddenly all those close games turn into potential Tar Heels wins.

UNC was also a dreadful 128th nationally in goal-to-go TD rate (54.5%). Turn a few more of those easy scoring chances into touchdowns, and another block falls into place.

Meanwhile, UNC allowed TDs on 88.9 percent of goal-to-go situations, which was well above the FBS average (even though they were right at the average on inside 40 scoring and red-zone TD rate). Go from awful to average, and we’re again taking a potentially big step forward.

UNC converted just 34.5% of its third downs last year, 111th nationally. But on the ground and in short yardage, it was actually pretty good — 51st in rushing conversions, 49th in third-and-short. So cut down on a few of those third-and-longs and get a little better QB play and…

OK, we’re rambling. That’s still a lot of “what ifs” and if the Heels don’t find a QB, it’s probably going to be another long season.

Still, the margin between train wreck and respectable may not be as big as you think. And if Mack Brown can get UNC back to respectability in Year 1, well we’ll all have a little egg on our face for suggesting this hire was crazy for a rebuilding program.