Recruiting is the lifeblood of any football team. We know this. Recruiting is also a rigged game. Intuitively, we know this, too. Hoping your team is going to the Playoff this year? Well, unless it’s one of, maybe, a dozen programs like Clemson, Florida, Alabama and Texas, it’s probably not. And that group has been surprisingly consistent for years.

None of this should be overly stunning, but after I posted my piece on Virginia Tech a few weeks ago, there was a lot of hand wringing over Justin Fuente’s current recruiting class (though, can two guys really constitute a “class”?) and I thought it might be worth digging in a little deeper.

So, I took the past 11 recruiting cycles (or what we’d call the Dabo era in the ACC) and looked at average class score (not total points, which is based in part on quantity, but average of all recruits, for a slightly more quality-based metric) along with number of 4/5-star recruits signed.

Let’s start with the scores.

What you’ll see is essentially three tiers. The gold, purple and green lines represent FSU, Clemson and Miami, respectively. Those three programs are recruiting at an entirely different level than the rest of the conference both historically and — especially — currently. This also really lays bare how good Dabo has been since that first title team in 2015, with three straight classes (and soon to be four) ahead of FSU’s.

The next tier — the middlings as we’ll call them — include Virginia Tech, North Carolina and NC State, with Louisville, Pitt and (surprisingly) Duke hanging around the fringes.

Then there are the bottom dwellers. Syracuse, Wake Forest, BC, Georgia Tech and Virginia holding fairly steady (save a year or two under Mike London at UVA) in this group.

What stands out is the consistency of it all. The standard deviation over this 11-year span is greater than 2 points for just one team: Clemson. That’s the Dabo Factor + a whole mess of resources.

We find that six of the 14 teams moved between groups one or zero times during this 11-year span, with four more doing it just two or three times. Most of those followed a major shift (coaching change) or are part of a current trend (Duke has effectively moved into the middle tier the past four seasons, NC State was in the lower tier often under T.O.B.). Only Louisville and Pitt — two teams that have shifted conferences and head coaches quite a bit in this span) have had real fluctuation.

The scale in these graphs is a little tough, too, because of the FSU/Clemson/Miami skew, so let’s remove them for a moment. 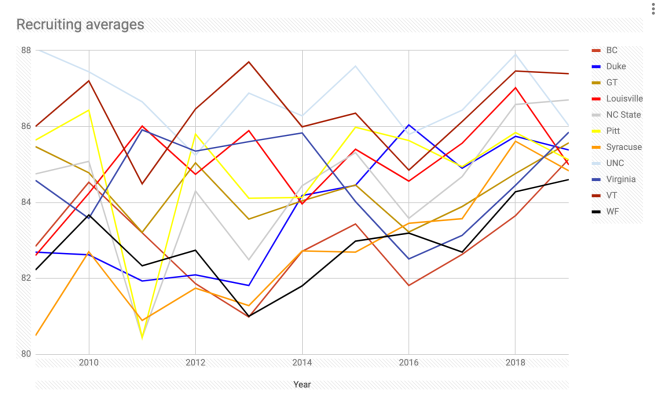 Again, it’s clear no one team has made a real stride into an elite recruiting tier at any point, nor has one completely plummeted beyond a minor blip. What’s perhaps most intriguing is how all of the Tier 2 & 3 teams have bunched together in recent years. Why? That’s probably a discussion for another post.

And perhaps even easier to see, here’s the full ACC with trendlines for the 11 years. Only Clemson has made a marked upward march, and the Tigers already started from a high point. Duke, NC State and Syracuse, to a lesser degree, have taken steps from the basement to the middle class.

The lines of demarcation are even more clear when we look at elite recruits. They pretty much all belong to three schools, while a few at the bottom virtually never land one. 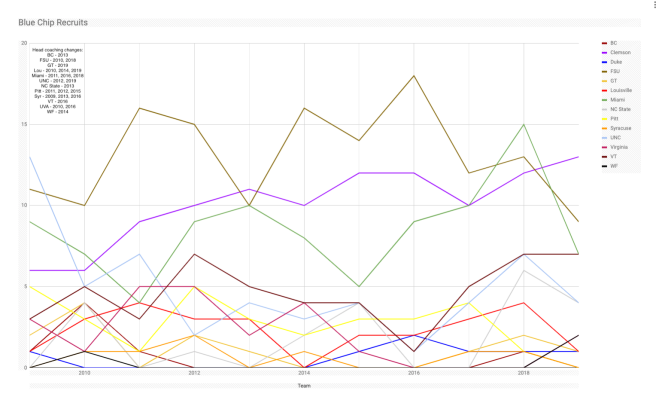 Over the span of this timeline, FSU has inked 144 blue chippers. Clemson has 111. Miami has 93. Meanwhile BC, Duke, Syracuse and Wake Forest have 24. Total. Combined. Over 11 years. For comparison, that’s three fewer than Alabama signed last year alone.

So, does that mean there’s no hope if you’re not a fan of Clemson, Florida State or Miami?

We can look at the trend lines here and see real progress at places like Duke or NC State. The job Dave Doeren has done in both recruiting better talent and developing that talent into NFL prospects is really under-appreciated. But those are still incremental changes — going from an average of about 82 to about 86, as Duke has. It’s going from Section 8 housing into a middle class ranch house in the suburbs. But if you’re looking for the penthouse, better start playing the lottery (or following Hugh Freeze’s playbook).

That doesn’t mean your teams can’t win. Louisville has had its moments. NC State, too. Duke makes bowls. Syracuse just won 10. Do that long enough, and recruiting can improve a bit — but not a ton.

So what does that mean?

For one, perhaps schools invest too much in recruiting. Sure, at the top, one or two more blue chippers might be the difference between getting to the conference title game and winning it all. But for the most part, you get the kids you get, and it’s hard for any coach to screw it up too badly or improve it too dramatically. The changes are incremental. Decisions on the culture you want and the specific recruits you go after is probably more important than the ability to sell generic blue-chip recruits on the school. (And, of course, these graphs don’t reflect recruits who transfer, are booted from the team or flame out.)

Even at a place like Clemson, where so much of the recruiting edge is pegged to culture and resources, the Tigers didn’t really surpass FSU in recruiting until AFTER they passed FSU in winning. Perhaps coaches that are stronger in player development should be valued a good bit more than the supposed recruiting geniuses. In fact, winning games is probably the best recruiting tool any program has.

It also means that if the playoff is the only real arbiter of a great season, then there are going to be a lot of disappointed fans. That may be why the Pac-12 and dozens of other locales have been more than a bit disenchanted with the current version of college football. I’m for expanding to eight teams in the playoff with guaranteed bids for conference champs. This tends to offer at least a shot for some of the middle tier folks.

Lastly, it probably also means that if player compensation ever becomes a reality, it’s probably not going to change the landscape much. If anything, it might help level the playing field a bit so schools with money but bad geography have some additional cache. But it’s doubtful.

Does this hold up across conferences? I dunno. I didn’t feel like compiling that much data. My suspicion is there’s a little more short-term volatility in the SEC, but the rest of the country reflects the ACC’s model, which says you are who you are, and the chicken (winning) comes before the egg (recruiting).

So is Virginia Tech’s current class concerning? Sure. But Fuente has also inked more blue chippers the past two years (14) than Frank Beamer had in the previous four seasons, and it’s not likely that, when all is said and done, the Hokies are going to wind up with a disaster on their hands.

Has Dave Doeren disappointed in some big games? Yeah, but given the difficulty of changing recruiting fates, the influx of talent in Raleigh probably warrants more praise than we’ve given.

And Dabo Swinney? Well, regardless of your thoughts on how much of that $93 million should be going to players rather than a coach, it’s definitely not been wasted money for Clemson.